Seeing the Manta Rays in Lembogan is a big draw card for a lot of divers. For many, the manta rays are the main reason they came to Lembongan. Twin Island Dive is here to help get you underwater with these amazing creatures.

Here we are going to cover some interesting facts;

There are two dive sites around Lembongan in which you have the chance to see the manta rays. One, is Manta Bay and the other is Manta Point. But what is the difference between the two?

Manta Bay is our manta feeding station. Located on the West coast of Nusa Penida, diving conditions are generally easy although there can be some surge. The Manta Rays are often smaller than the giant ones found at Manta Point. The plankton rich water found along the limestone coast attracts the Mantas all year around. The dive site is a shallow bay with a mixture of sandy and coral bottom. Generally a maximum depth of 12m. Divers spend most of the dive quite shallow, closely observing the Mantas as they feed.

Manta Point is our manta cleaning station. Also located on South West coast of Nusa Penida. 45 minute boatride away from Lembongan, alongside dramatic limestone cliffs.  This site provides year round opportunity for a magical encounter with the majestic Manta Rays. The main attraction of the dive site is the cleaning station or large rock formation found at a shallow depth of 5m. The plankton rich waters attracts circling mantas, waiting to be cleaned. Manta ray mating trains with as many as 30 mantas on one dive have been spotted at this site.

What is a cleaning station? 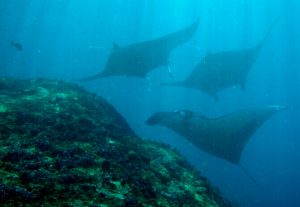 Cleaning stations are areas where mantas go to have parasites, dead tissue, and algae build-up removed by cleaner fish. Cleaning is a very important part of the manta ray’s daily routine, and sometimes they spend up to eight hours a day being cleaned by different fish including: scissortail sergeant majors, bicolor cleanerfish, moon wrasses, and butterflyfish.

What is a feeding station?

Feeding stations are where manta rays go to feed on tiny marine organisms including microscopic plankton. With the swells and wind that affect the south coast of Penida, plankton rich water is pushed into Manta Bay. Due to this moment of food induced water, it is often we see manta rays feeding inside this bay.

Manta rays have a terminal mouth (on the front of their face) that allows them to take in large amounts of plankton rich water; meaning they can ventilate and feed at the same time. The cephalic fins that manta rays have by their mouths (their so-called devil horns) are believed to help the direction of water flow into the manta’s mouth. Sometimes mantas can also be seen using their cephalic fins to aid in tight maneuvers, as an airplane would use its ailerons when performing acrobatics. One aerobatic maneuver that these creatures perform is the barrel roll. It is thought that they do this, to try and capture as much plankton as they can in a small area.

Manta Rays’ Gill-rakers filter zooplankton from the water. The gill-rakers sit along side the gills, allowing for feeding and oxygen absorption to occur simultaneously.

What is the difference between giant mantas and reef mantas?

The giant manta (Manta Birostris) is the bigger one of the two manta species that we get in the area. Not spotted very often here, it is still possible to see these bigger rays, passing by in the blue water. Their wing span can reach up to 8 meter wide.

The reef manta (Manta Alfredi) is the smaller manta, with an average wing span of around 3 meters. The reef manta ray is the one that we see more often at the manta dive sites, feeding or cleaning.

How to tell the difference between the two, besides the size?

– From below; giant manta rays normally have dark shading around the mouth area, more markings on their belly and dark shading, under the back edge of the pectoral fins. 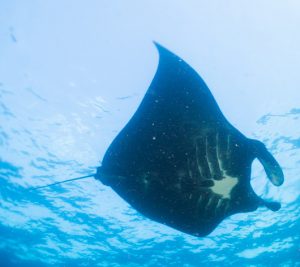 This is a black manta, a darker shade of manta ray, compared to the standard colour shading. Of the hundreds of species of sharks and rays, only manta rays have this melanistic morph –an unusual darkening of body tissues caused by excessive production of the dark pigment melanin.

It is thought that around 15% of the manta ray population in the Lembongan area is Melanistic. This is a higher percentage then a lot of other areas that also have melanistic manta rays.

Black colour morphs are not the only colour morphs. It is also possible to have, white manta rays – Leucistic colour morph. White manta rays are very rare and there has only been one seen in Lembongan in recent years. It was not even seen at one of the manta sites, it was spotted at Crystal Bay.

Using the manta rays unique spot pattern on their belly, the Marine Megafauna Foundation has identified and logged over 500 unique manta rays in the Lembongan area.

To help the Marine Megafuna Foundation in their research, you are able to upload your manta ray ID photos to Manta Matcher. An ID photo is a belly photo of the manta ray, where it is clearly possible to see the spot pattern. 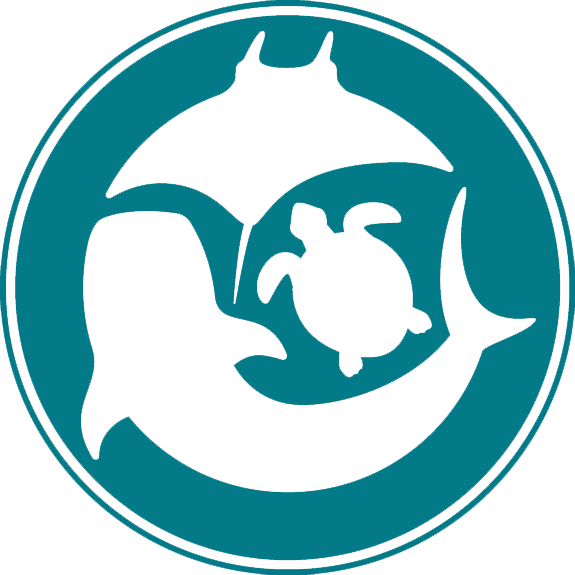