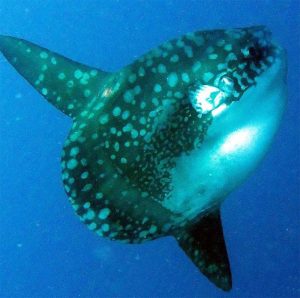 One of the star attractions in the waters around the Nusa islands, are the Molas in Lembongan. These strange and interesting creatures, bring divers from all over the world, to catch a glimpse of them. As we are getting closer to the Molas season, it is time to fill you full of knowledge about the mysterious Mola.

We are going to be looking at:

The shape and colour of the Mola is where its name comes from. In Latin, ‘Mola’  means millstone, which is a round, gray, rough stone. Other countries refer to it as a Sun Fish or Moon Fish.

There are two different types of Molas – the Mola Ramsayi (the Molas in Lembongan) and the Mola Mola. For more information about the two, check out our Crystal Bay blog.

Not the smartest of creatures in the ocean, which could be guessed just by looking at one or seeing it swim. A specimen weighing 200 kg may have a brain no bigger than a nut.

The Mola has a soft light decalcified skeleton (despite being bony fish), with little or no ability to flex side-to-side; therefore, the dorsal and anal fins are their sources of movement. Inside their lumpy exterior, Mola do not have ribs. Their skin is made up of collagen fibers up to 15 cm thick. This thick layer, allows the Mola to be protected from stinging jellyfish, which is the main staple of their diet. Covering their skin are dermal denticles. Similar to sharks and rays, these tiny tooth-like forms (1mm in length) act like a suit of armor to protect the fish.

The Family of the Mola:

You will be surprised with what other fish make up the family of the Molas in Lembongan. It is very likely, if you have been diving in topical waters, that you have seen one of the Mola’s family members underwater.

Molas are in the taxonomic order of Tetraodontiformes meaning the four bones of the jaw, are modified and fused to form a beak-like structure. Other Tetraodontiformes are: trigger fish, boxfish, porcupine fish, and pufferfish. A characteristic of tetraodontiformes are the four hard protruding jawbones that are generally referred to as teeth; however, this feature is less prominent in Mola than in Triggerfish.

The modified jaw is not the only think that Molas and Triggerfish have in common. These two fish swim very similar to each other. The Triggerfish has more control over its tail fin, allowing greater control and movement compared to the Mola.

Life of the Mola:

How the Mola mates, is still a mystery or even where they do it. Even though little is known about mating, research has shown that, Mola are the most fertile of all saltwater fishes. An adult female can produce up to 300,000,000 eggs at a time. These eggs are tiny, 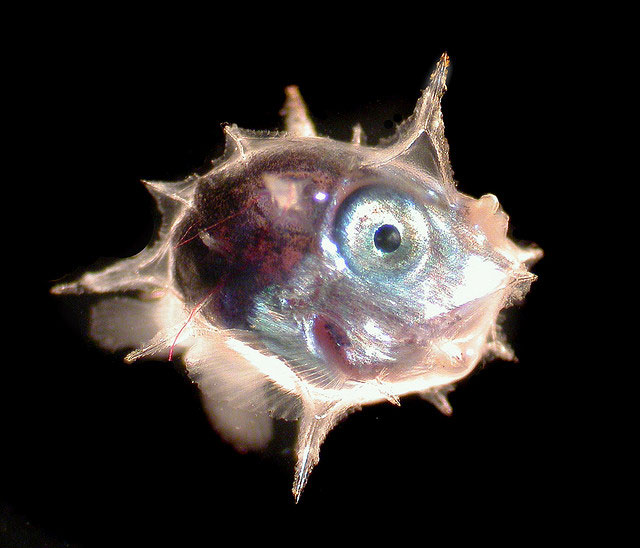 even when hatched, a Mola larvae is only 2.5mm. The size of the eggs and the larvae, mean that not a lot of Molas get the chance to grow as they are preyed on by many other fish.

When reaching full maturity, a Mola can gain over 60,000,000 times its hatching weight which is equivalent to a healthy human baby growing to a weight equal to six Titanic ships!

Mola have the unique ability to suck and spit water through their small mouths in order to tear apart their prey – jellyfish, salps, comb jellies, squid, and brittle stars – making them easier to consume. Juveniles have also been seen spitting jets of water into the sand to search for small molluscs. Mola have claw-like teeth in their throat, which are used to shred food before it reaches the stomach. Their diet is nutritionally poor, forcing the sunfish to consume enormous amounts of food to maintain its large size.

It is believed that Mola are generally found between the surface and the Mesopelagic Zone (200–1,000 m). They are thought to live most commonly at about 300 m. There water is much cooler at this depth. Here in Lembongan, as the shallower water starts to cool, the Molas are able to come up to a depth at which divers are able to see them.

Cleaning Stations for Molas in Lembongan:

Just like we talked about in the Manta Ray Blog, cleaning stations are areas where reef fish are able to clean other creatures. Studies in Indonesia have reported up to five species of fish can be seen simultaneously cleaning a Mola. 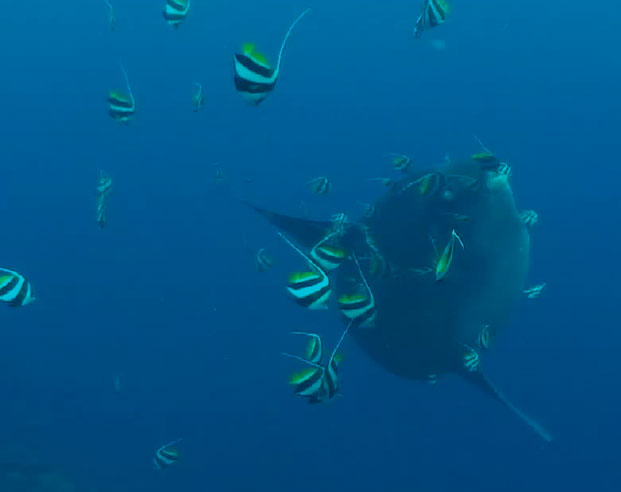 In Lembongan, the most famous cleaning station is at Crystal Bay. There are also Mola cleaning stations at each of the dive sites on the north coast of Penida as well as at Ceningan Wall and Gamat Bay, in the channel.

Molas are very dirty fish, so cleaning stations are very necessary for the health of the Mola. Up to 54 species of parasites may reside on the skin and internally. It is also thought, that the mean reason the Molas breach is to clean off parasites when they slap back down onto the water. Molas have also been seen basking at the surface with sea birds cleaning parasites off them. It is speculated that jellyfish (the primary diet of mola) are one of the intermediate hosts of several of these parasites.

To confirm your diving for the Mola season (July to October)